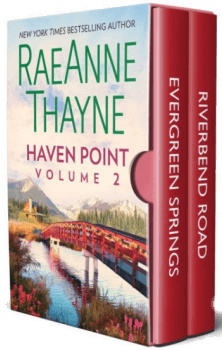 Christmas is the last thing on Cole Barrett’s mind this year. He’s barely hanging on trying to care for his two grieving children since his ex-wife died in a tragic accident. For the reclusive Cole, this is no time for gift-giving and celebration—and certainly not for a sunny-natured optimist to blow into his screwed-up life.

Physician Devin Shaw has long researched the curative powers of Lake Haven’s mineral waters. Unfortunately, the hot springs are on Barrett property, forcing Devin to strike a bargain with the ranch’s attractively gruff owner: she’ll give Cole’s children a magical Christmas, and Cole will allow her patients access to the springs. But can she work her holiday magic to heal the Barrett family’’s battered hearts—and her own?

Protecting the streets of Haven Point isn’t just a job for police officer Wyn Bailey, it’s a family tradition. But lately she’s found herself wanting more, especially from her boss—and overprotective brother’s best friend—sexy chief of police, Cade Emmett. The only problem is getting Cade to view her as more than just a little sister.

Cade’s hands-off approach with Wyn isn’t from lack of attraction. But his complicated past has forced him to conceal his desire. When Wyn is harmed in the line of duty, Cade realizes the depth of his feelings, but can he let his guard down long enough to embrace the love he secretly craves?

Other Books in Haven Point Series