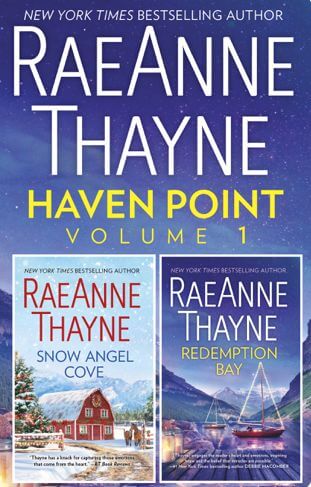 Nothing short of a miracle can restore Eliza Hayward’s Christmas cheer. The job she pinned her dreams on has gone up in smoke—literally—and now she’s stuck in an unfamiliar, if breathtaking, small town. Precariously close to being destitute, Eliza needs a hero, but she’s not expecting one who almost runs her down with his car!

Rescuing Eliza is pure instinct for tech genius Aidan Caine. At first, putting the renovation of his lakeside guest lodge in Eliza’s hands assuages his guilt—until he sees how quickly he could fall for her. Having focused solely on his business for years, he never knew what his life was missing before Eliza, but now he’s willing to risk his heart on a yuletide romance that could lead to forever.

McKenzie Shaw would do anything for her hometown of Haven Point. It may be small, but it’s never let her down…unlike gorgeous, infuriating Ben Kilpatrick. He was her childhood hero until he closed his family’s factory, leaving the town’s economy in shambles. Now his tech firm is considering opening a local facility. For Haven Point’s sake, McKenzie has to grit her teeth and play nice.

What could a town filled with painful memories ever offer Ben? Yet seeing the town through the eyes of McKenzie—its fiery young mayor—he suddenly has his answer. If only he can resolve the animosity crackling between them, Ben may have found the place where he can build ties and find healing…a place where love arrives when it’s least expected.

Other Books in Haven Point Series