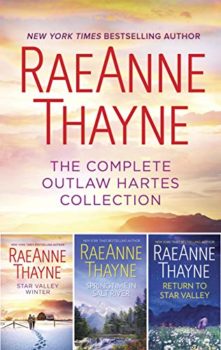 Enjoy all three Outlaw Hartes stories together for the first time! New York Times bestselling author RaeAnne Thayne brings readers along on three heartwarming romantic journeys as the Harte siblings find their happily ever after. Originally titled The Valentine Two-Step, Taming Jesse James, and Cassidy Harte and the Comeback Kid.

Single father Matt Harte learned the hard way not to trust women. His wife left him because she couldn’t deal with ranch life—so the last thing he wants to do is plan the annual Valentine’s Day dance. His daughter, Lucy, has plans for her father; she’s determined to get him to fall for beautiful vet and recent Salt River transplant Ellie Webster.

Ellie knows that Matt doesn’t want her in his town, let alone on the too-small dance committee of two. It’s not as if she wants to spend all that one-on-one time with the rugged rancher, imagining what it would be like to be his partner—for real…

Jesse James Harte grew up as wild and untamed as his Old West namesake, but now he’s the law in this stretch of the Wyoming high country. That meant trouble is his business—and if he’d ever seen somebody in trouble, it was the town’s new schoolteacher, Sarah McKenzie.

She is as beautiful as a mountain meadow in springtime. But the haunted look in her eyes says she’s running from something—something that might be catching up with her. He ached to protect her, to take that look away—and make her his forever.

Ten years ago, Cassidy Harte had stood at the altar waiting for Zach Slater. And when he didn’t show up—and was said to have disappeared with her brother’s flirtatious wife—she did the only thing she could do. Held her head up high. Helped raise her motherless niece. And swore never to get involved with a man again.

And then back into her life walked Zach—with an “I’m sorry” on his lips, an explanation she refused to hear and the vow that he would make her his once again. And this was one vow he was determined to keep…. 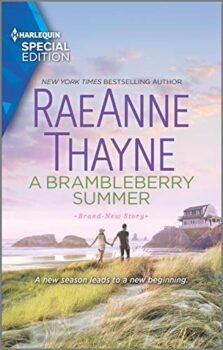 RaeAnne Thayne is giving away a signed copy of A BRAMBLEBERRY SUMMER plus a $25 Home Depot gift card to one winner.