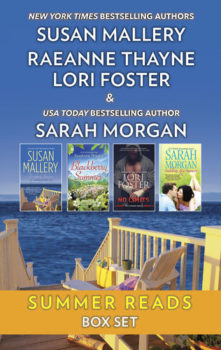 A selection of must-read summer novels by bestselling authors, collected here in one volume!

In Blackberry Summer by RaeAnne Thayne, single mom Claire suffers an accident that forces her to slow down and lean on others—especially the sexy new chief of police, Riley McKnight. Blackberry Summer was originally published June 2011 in mass market paperback and eBook.

In Suddenly Last Summer by Sarah Morgan, fiery French chef flise Philippe is dealing with the collapse of her café when her old flame, Sean O’Neill, suddenly reappears in town.

In No Limits by Lori Foster, a surprise inheritance reunites a mixed martial arts fighter with the woman he’s never forgotten.

And in Barefoot Season by Susan Mallery, Carly and Michelle were once inseparable, until a shocking betrayal destroyed their friendship. Now Carly is implicated in the financial disaster lurking behind the Blackberry Island Inn’s cheerful veneer.