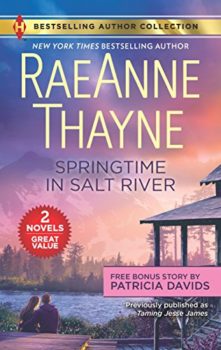 Schoolteacher Sarah McKenzie is desperate to help one of her students who walks around with a haunted look in his eyes. With no one else to turn to she reluctantly asks Jesse James Harte, the handsome police chief, for help. Jesse unnerves her in more ways than one, especially when he turns his intense gaze her way.

Jesse grew up as wild and untamed as his Old West namesake, but now he’s the law in this stretch of the Wyoming high country. That means trouble is his business—and if he’s ever seen somebody in trouble, it’s Sarah. Jesse can tell she’s running from something—something that might be catching up with her. Jesse will risk everything, even his heart, to keep Sarah safe.