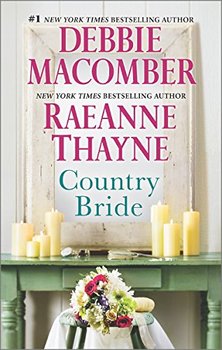 Luke Rivers is a man of his word.

He agrees to marry Kate Logan when she foolishly proposes to him—after one glass of champagne too many—at her former fiancé’s wedding reception. And Luke, stubborn rancher that he is, refuses to renege on his promise.

Kate was devastated when the man she’d always loved married another woman, a newcomer to their Oregon town. But now, not only does Luke refuse to break their engagement, he insists that Kate doesn’t love Clay—she actually loves him!

Brodie Thorne is a man who knows what he wants.

And that’s Evie Blanchard, a physical therapist from LA who recently moved to Hope’s Crossing, Colorado. He wants her to work with his injured daughter, Taryn. A wealthy, self-made man, Brodie will do anything to get Taryn the rehab she needs—and that includes convincing the
reluctant Evie to move in with them.

Despite her vow to keep an emotional distance between them, Evie starts to fall for Brodie’s adorable little girl…and for Brodie himself.