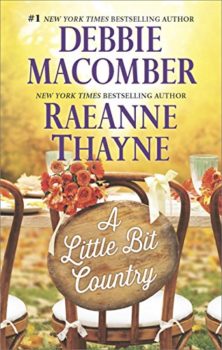 When a city woman meets a country man…

Rorie Campbell has a pleasant, predictable life in San Francisco, where she’s seeing a pleasant, predictable man. Then, while she’s on vacation, her car breaks down on an Oregon country road, and horse rancher Clay Franklin comes to her rescue. Rorie soon discovers that a city girl can fall in love with a country man. And the other way around… But Clay has no right to return her feelings because he’s engaged to another woman!. Is he willing to change that situation for Rorie—and himself?

When a small-town woman falls for a big-city cop…

Shop owner and single mom Claire Bradford has just suffered a serious car accident in her hometown of Hope’s Crossing, Colorado. She certainly has no time for romance, or so she tells herself—especially when Riley McKnight comes back to town as the new chief of police. The accident forces Claire to rely on other people, including Riley, and she realizes for the first time that things have to change—in her own life and in the town, where a string of robberies has damaged the residents’ sense of community. Riley is the man who can bring about the change everybody needs!